A Beautiful Day for Yardwork!

Today was another beautiful day! We decided to spent some time outside working on the yard. It is actually one of our favorite things to do. Zoey is big enough now that she can help and she does. Zoey is a very big helper and is interested in all of the things we do. 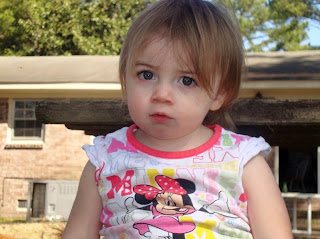 The first thing we did (by we I really mean Stephen, but I pitch in too) was rake the pine around our garden spot so we could start a fire and burn all the branches that fell during the ice storms this winter. Zoey helped with the raking and moving pine straw. 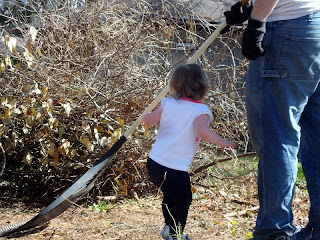 Next we started a fire. Zoey helped with that too. She did really well about not going near the flames, but she wanted to see everything we did and helped us blow on the kindling to get it started. Before long, we had a good hot fire burning. 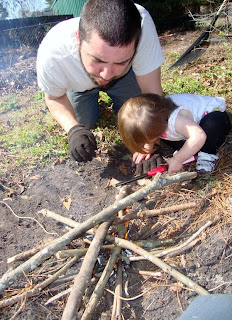 While the fire was heating up Zoey went on an adventure in the creek. (It's actually the runoff for the rain water, but creek sounds more adventurous.) She had her stick and started hiking. Every once in a while she would ramble on to herself about something she found in the water. It's pretty adorable, and well, every kid I know loves to play in the water. 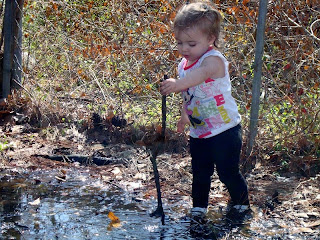 Stephen and I also worked on uncovering this concrete foundation in the back yard. We can't figure out what in the world it was used for. There are three pits cut into it. If you have any ideas let me know. We want look at using it for a foundation to a shed because it seems really sturdy, but we will look into it a little more. 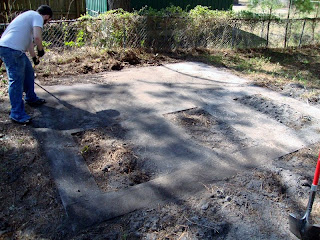 Stephen turned the water on so he could use the water hose to help control the fire because it was time to BURN things!!! (Yes, I have a small pyro side to me and I like fire.) Zoey loved helping with the watering hose. I showed her how to drink out of it (a lesson every kid should learn) and she had a blast with that. 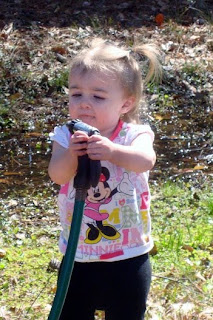 I think we have a little scientist on our hands. Our faucet leaks where the hose meets the house (one of the many outside things to fix), so Zoey played with the leaking water. Then she found out that if she moved the hose around more water came out. She kept doing little experiments: she would move the hose at the top and then got about a foot further down until picking the hose up wouldn't make more water come out. It thought it was pretty cool that she was trying to figure it out. 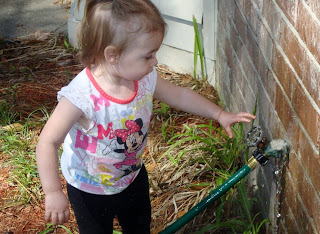 After the fire started to die down, we ate lunch outside. Zoey really seemed to like this and ate up all her lunch. I just love spending time outside, especially while it isn't yet scorching hot with drinkable air (the South is wonderful, but is notorious for the humidity.) 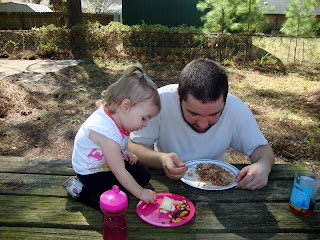 Finally, our last project (Stephen's last project) was to get the pine straw off of the roof where it builds up on the gutters. Stephen climbed the ladder and did it pretty quickly. I wouldn't go up there, but Zoey wanted too. She got to about the second step. It was cute to watch her. I tried to explain the difference between the ladders we go up at the park and this one, but I'm not sure it really got through. Stephen came down again though and all was well. 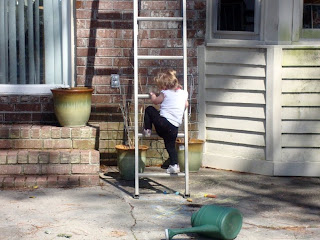 We had a great day outside. It is good to the soul to get out and improve your yard and soak up some Vitamin D. I love that it is something we can do as a family. We are all outdoorsy people.
Posted by Amanda McCusker at 12:06 PM

Email ThisBlogThis!Share to TwitterShare to FacebookShare to Pinterest
Labels: Our Adventures