Zoey all ready for our Downtown adventure. 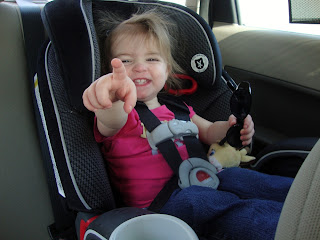 Last weekend was beautiful! So we decided we would spend the early afternoon downtown adventuring and treat ourselves to a yummy lunch. We decided to go down King's street, a part of town that we often don't visit, but Mellow Mushroom sounded perfect for lunch. (And it was!) It was about 20 blocks or so from where we parked. Zoey likes to be independent and walk herself so we carried her stroller (a small one) and let her walk. To our amazement so walked the ENTIRE WAY! She is such a little trooper. It was a little slow, but we didn't care, it was just another way to enjoy the beautiful day. She would walk up stairs, balance on a sidewalk beam, and even stopped at a pretty house, which turned out to be on the tour of the city, who knew?
We ate and then decided to check out all the excitement on Marion's square instead of just heading to the waterfront like we normally would. There was a lot going on, bouncy buildings, which seemed like fun but we were (let's face it) to old and Zoey too young for these. So we walked on past lots of food, business vendors and people in general. Then on the other side of the park is a petting zoo! Too cool!
Zoey saying "oh no" when the sheep pooped. 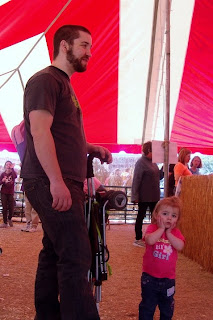 Zoey loved all of the animals! Especially the sheep. I told her that the sheep said "baa" (we've been working on animal sounds, so this was a perfect learning experience.) She copied me and said "baa, baa, baa, baa." We kept trying to show her that there were many different animals to see (which we did get around too), but she was only interested in the sheep for a while.
Zoey becokoning the sheep to her with "baas" 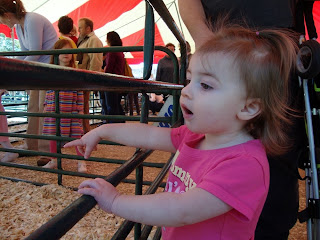 Her persistence paid off. The sheep was sitting uninterested for a while, but then beckoned to Zoey's calls. The sheep stood up and came toward Zoey. I thought it was really cool. I think Zoey realized the sheep was a lot bigger than it looked lying down. But she was brave enough to go up to it and she even pet it! The sheep had grown so fond of her that she followed her where ever she walked along the fence.
The sheep following Zoey, made for a cool picture though 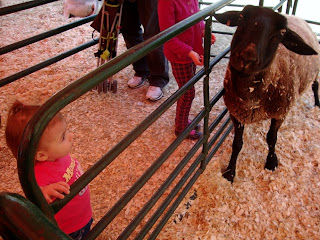 Zoey eventually took our encouragement to see the other animals too. She went by the yak, zebra and camel with some interest, but little compared to the sheep. And what does she find on the other side of the petting zoo tent? More sheep. These were male sheep, so I suppose that makes them rams. And she just sat there looking at them. She didn't call to these like the one she friended earlier, but she was very interested.
Zoey watching and just appreciating the sheep, I mean rams 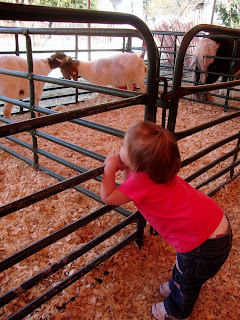 Kids are funny in what they find interesting. I wouldn't have thought sheep to be that interesting, but Zoey found them fascinating! She found the whole experience fascinating. We ended up not doing much that afternoon, just lunch and the little petting zoo tent, but Zoey was content (and ready for a much needed nap.) However, even as we started walking back to the car she would point to things and ramble on about them. It's so cool to see how she experiences the world.
Zoey appreciating everything around her 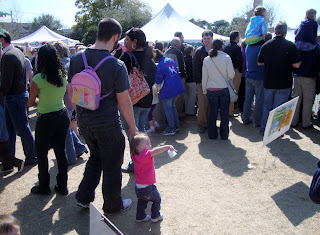 Every day with Zoey is an adventure, but this was one that we will remember for a while. I know she learned a lot that day because when we got home she went to play with her little people farm and went straight to the sheep saying "baa." The world is so much more interesting through a toddler's eyes and I am trying to learn to appreciate it in that manner and not take anything or anyone for granted.
Posted by Amanda McCusker at 1:14 PM