Day 5: A Picture of somewhere I've been (Czech Republic)
I love to travel and don't do it nearly as often as I'd like. I've gone to some pretty cool places in my years, most of them local. But I did get to have my experience of a lifetime the summer before my junior year at Clemson. I went to the Czech Republic!!! I was so excited and nervous and did I mention excited? 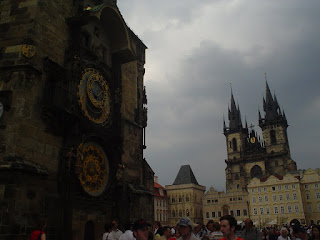 Old Town Square, Prague
There were six girls and a professor. It was a month long study abroad for anthropology. We had a blast. We stayed at a hostel in Prague (Praha), which was in the middle of everything. We stayed in Old Town Square. There are always people and things going on. The architecture is so cool. I love the mix of old and new. 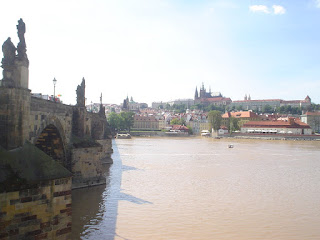 Charles Bridge and Prague Castle
I could go on forever about this trip, there were a few highlights. It was beautiful! I loved taking lots of pictures and we met some really cool people. One of my favorite places to walk was on Old Charles Bridge. It was a hub for activity. There were people selling things and drawing pictures. I was one of many taking pictures. It had a great view of the castle. 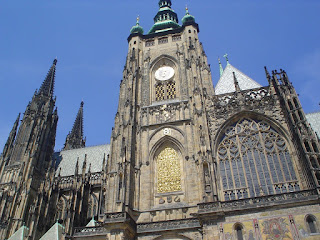 Prague Castle Bell Tower, Czech Republic
The castle was amazing! So big and beautiful! It was very touristy though. I tended to like the parts where we were just blending in to the society. We met several people through the professor who were native Czechs. One lady was a journalist, who I really gravitated to because that was my focus in College. It was so cool experiencing the different culture. My biggest take from it was that they moved a lot slower and had a lot less stress. I really liked that part. 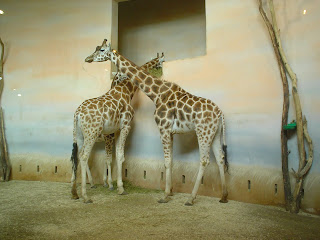 Giraffes at the Prague Zoo
On one of our free days, me and a couple other girls went to the Prague Zoo. Turns out the animals look a lot like they do in US zoos. But it was fun trying to read the descriptions in Czech. (They had English too.)
I actually learned a good bit of Czech while I was there. I could say things like "hello," "goodbye," "please," "thank you," "where's the bathroom," "how much," "water no gas" (the default is carbonated water, which I don't particularly like, so I very quickly learned that no gas was distilled water.) I also could distinguish foods and learned how to order a drink. It is funny that wine and beer are sometimes cheaper than soda there.
We had such a good time. One of the girls even introduced me to my husband (once we got back to school), so it was pretty much a win-win.
Posted by Amanda McCusker at 7:11 PM

Email ThisBlogThis!Share to TwitterShare to FacebookShare to Pinterest
Labels: Randomness