Day at the Park

This weekend David came to visit. Our first fun adventure was a day at the park. Stephen and David played baseball and football while Zoey and I played on the playground before joining them. We had a great time outside, it was a beautiful day!
Since there weren't very many kids on the playground this morning we got to explore the WHOLE playground. This isn't something we do on this playground very much because it is sectioned off clearly with age guidelines. (The big kids equipment is higher off the ground is the main difference.) Zoey had a great time climbing on all of the tall rope ladders and sliding down the big kid slides (her favorite playground event.) 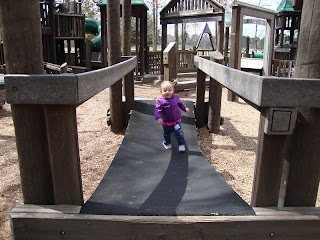 While on the big kid playground, Zoey felt confidence enough to climb the stairs, walk across the bridge and slid down the slide all by herself. We had done it a couple times together and then she set off on her own. I was at the bottom of the slide waiting for her. I was so cute! I'm glad she is confident enough to do things like that by herself. She is definitely growing up fast. 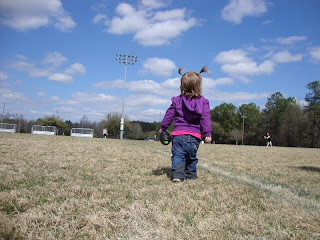 After we played for a while on the playground, we met up with Stephen and David on the fields. Zoey had a great time playing catch with them. She would grab the ball from one of them and run it all the way to the other.
It was a great adventure outside. Zoey did so good playing and even though it ran into nap time she continued to play strong and happily.
Posted by Amanda McCusker at 11:34 AM

Email ThisBlogThis!Share to TwitterShare to FacebookShare to Pinterest
Labels: Our Adventures