This weekend we went to not one, but two birthday parties! Zoey had such a fun time. 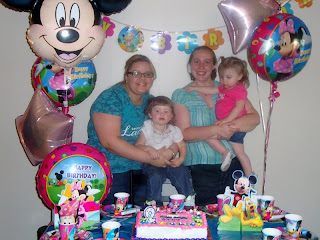 The first party was for Adrianna. I used to work with her mom, Bianca, at Best Buy. Adrianna turned 2 this month, and was beautiful. Zoey and Adrianna got along well as long as they weren't after the same toy, but kids will be kids and even though we try, 2 is just the beginning of learning how to share, especially since both are only children. Nonetheless, they were
adorable and we had a lot of fun celebrating with Adrianna. 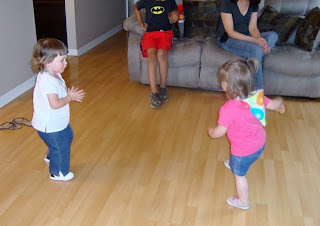 I think the best part was Zoey and Adrianna dancing to music in the living room. The theme was Minnie Mouse, a common favorite of both the girls. Zoey was very interested in all the balloons around (a word she is quickly perfecting.)
Zoey also loved the noisemakers, which ironically no longer make noise. It's the one that you blow in and the tube unfolds; Zoey liked it to tickle her. Though I suppose since it doesn't make noise anymore it wouldn't scare kids or annoy adults.
And have I forgot to mention the cake? Not only was it Minnie Mouse, but it was also delicious. Overall a great time and I enjoyed seeing Bianca again, for it had be too long since we had visited. 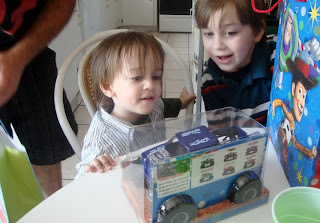 The second birthday party was on Sunday for Declan who also turned 2. Again, Stephen and I are friends with his Daddy. It was a simple party for close friends and family. It seemed like he had a blast though.
Declan got not one, but three trucks and was thrilled. He liked the monster truck we got him alot, so I was happy. Then again, if he didn't like it I would have taken it cause it
looked like a lot of fun. 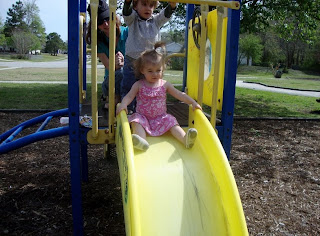 Zoey and Declan played very nicely together. They quibbled a little (like any 2 year olds would) but it was more like an old married couple deciding what to do. They loved to play outside. We even took a walk to a park close to their house. The kids had a blast playing on the slide and swings.
We had a delicious lunch of hamburgers, mac and cheese and cole slaw and of course ice cream and cake. Zoey was so tired at the end of the festivities that she was about to fall asleep sitting up. Another fun afternoon and we all had a blast.
Posted by Amanda McCusker at 10:52 AM

Email ThisBlogThis!Share to TwitterShare to FacebookShare to Pinterest
Labels: Our Adventures, People We Love