Extra Patience Gives Zoey and I an Awesome Evening

The fact that I had patience today shouldn't really seem like that big of a deal, but it feels like it is. As a mom, I actually have more patience than I give myself credit for, but some days I feel like I run out before they day even gets started good. This has seemed to occur more often since I found out I was pregnant again. I think this is mostly due to fatigue and morning (anytime) sickness. Although, I can't complain too much because my morning sickness has been very mild; I've mostly just been really tired. Today, however, I had patience all evening. I even thought in the middle of it all, wow, I'm feeling good tonight. I actually give some credit for my surplus in patience to our gardening adventure this afternoon (read previous post.) Something about gardening is very soothing. 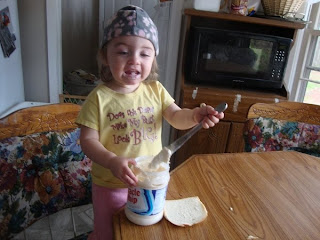 Zoey helping make lunch yesterday
Anyway, I want to share some of the cool things my extra patience allowed me and Zoey to do tonight:
--Zoey helped me cook dinner. She actually helps me cook alot, but she did tonight as well. She really likes being in the kitchen and has always been very interested in what we were cooking. Sometimes I think she would rather watch water boil than Mickey Mouse (I know!) Zoey loves to stir. We have encouraged this and now she can stand on her stool and stir all by herself because she has learned how to and not get burned. So tonight we had Hamburger Helper, a simple meal after a busy day. She stirred it while it was heating to a boil and I washed dishes (with an eye on her of course.) She did great! She also helped me add the extra ingredients (we always add something else yummy to HH.) Zoey helped me cook practically the entire meal and even helped me get some cleaning done. Not too bad for a one and a half year old if you ask me. 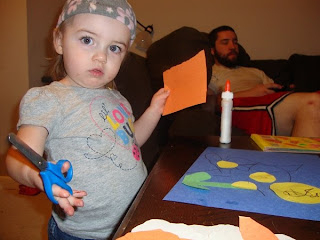 Zoey completing her masterpiece artwork
--We also did an art project, but not any art project...Mommy cracked out the scissors and glue! We did a spring scene. I cut out all of the parts like flower stems, petals, clouds, and a sun. Then I showed Zoey again how the glue works. She likes it, I think because it's messy and works like stickers, which is still her favorite. I showed her how a flower looks and labeled all the parts and then she put her own together. I think it turned out beautifully! Zoey also decided to try out the scissors tonight. She actually did pretty well with them. I showed her how to hold them and how to open and close them. She got the idea, but I'm not sure her hand is big enough yet, even for safety scissors. She had a hard time opening and closing them. But she let me help her a little and she cut a piece of paper in two! She had fun with it and that's all that matters. And I enjoyed the time with her. 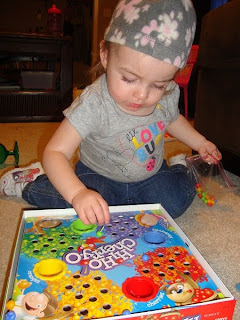 Zoey counting while playing Hi Ho Cherry-O
--The last awesome thing my extra patience allowed us to do was play Hi Ho Cherry-O. I can't wait to play board games with Zoey because it was one of my fondest memories growing up (playing board games at night with my Mommy.) I've actually had this game since Zoey was like 6 months old. I found it on sale and was like...yes! So tonight I pulled it out. I've been wondering how she would do with this one since it is mostly counting. (For those who don't know this game, it is a board with a basket full of fruit and a tree to lay the fruit out on. You spin a spinner to add or subtract the fruit from the tree to your basket. Whoever gets the fruit in the basket first wins.) I didn't expect to actually play the rules with Zoey now, but she still had a good time with the game. She would count the pieces as she put them into the basket. This was actually really cute. She is getting pretty good at saying one, two and three, but past that it is just a noise for each fruit or she will start over with one. She also had a good time pouring fruit from one basket to another. The cool part is the baskets are set in the board beside its color and she would continuously put the right color back in the right place even after getting out several of the baskets at once--she would remember where she got each one and even correct herself (without me interfering) if she put it back incorrectly. She didn't even try to eat the little fruit pieces. We had a blast playing! I think we will bring that one out again. Even though we aren't playing by the rules yet it has great educational value with counting, fine motor skills and eventually colors.
I'm constantly amazed at how much she understands while she is still so little. For example, Zoey has always loved the kitchen so since she was tiny we have explained that the stove and pots are hot. Now even if we say a fire outside or her food is hot, she understands. We've done the same with the oven so she understands to back up when I need to open it. I've also been able to explain that I touch the spoon and not the pot when I stir, that is how she learned how to stir and she has been doing it since before she could stand by herself. We would hold her so she could hold onto the spoon and she would get mad if we moved her before she had finished stirring. 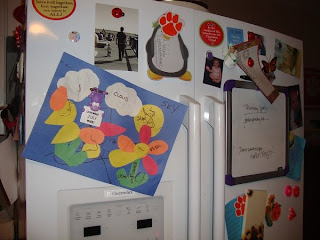 Zoey's artwork proudly displayed on the fridge.
I don't always have a lot of patience to do all of this everyday. But we do play games and do crafts often, some being more complicated than others. And cooking is a regular thing, the difference is how involved she gets. My point in this big long run-on is that I found myself with extra patience tonight and I seized the opportunity to do some things with Zoey that I've been wanting to do. I've been working really hard on having more patience and tonight it paid off. I am very thankful to have such a curious little girl who loves to try new things. I try really hard to keep challenging Zoey, it is the best and most fun way to learn.
Posted by Amanda McCusker at 8:50 PM