Today our doctor's appointment confirmed that I had a miscarriage. This is sad loss, but today, I only felt relieved to finally get confirmation so I can have closure. Let me tell the story...
(don't worry I'll try to leave out the gross details.) 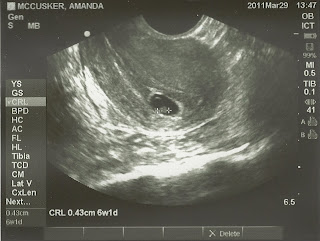 This is the ultasound from our last Dr.'s appointment, the baby measured at 6 weeks. It is nice to have this one picture of our baby, it makes it real when sometimes it all feels like a dream.
We found out we were pregnant the first weekend in March. I remember this because my parents were in town for my Mom's birthday. We were so surprised that we got pregnant so fast! We were trying, but we had just started. Then we had that horrid first doctor's appointment that filled me with stress and second guessing. Then I finally get to my awesome doctor and find out that the baby isn't measuring as big as he should be. The concern really came when I started bleeding and getting cramps. For the next week I felt horrible. I didn't get anything done around the house and was about to buy stock in Tylenol. Then on Saturday morning (April 2) I passed "tissue" as my Dr. called it and immediately felt better. After a few more days the bleeding stopped and I then felt better than I had in over a week. I knew in my heart that that was it and I was no longer pregnant. But I still needed confirmation. I got bloodwork done (which sucked, my bruise is just now going away after a week), but it came back indecisive. This annoyed me, especially when it seemed the nurse didn't want to tell me I had a miscarriage, but I didn't really blame her, I wouldn't want to tell anyone either. Anyway, due to scheduling conflicts I had to wait a week to get my Dr.'s appointment to confirm the miscarriage. Ironically, I kept the original appointment I got last time I was at the Dr.'s.

That was today. Zoey and I got up, got ready, ate breakfast, watched Mickey (The only way to start the day) and then left. We picked Stephen up from work (thank goodness he could come with us) and headed to the Dr.'s. She was really nice and talked to us first. She explained that the bloodwork I had gotten done still showed signs of positive pregnancy, but were really low. Since I wasn't that far along it caused the test to be indecisive. So we did an ultrasound. Let me tell you, it's much more fun when there is a baby there. But it confirmed the miscarriage and that everything was healthy and returning to normal, which is good.

We talked to the doctor again and my prevailing question was when can we try again. She said give it two cycles (or more) and then go for it. Apparently after you stop birth control (and after a loss) your uterus is thin and not always acceptive of a baby. It seems like common sense now, but I really didn't know it (about the birth control part at least.) She also comforted by saying there was nothing I could have done to prevent it and nothing I can really do from here other than give your body a chance to re-cooperate and take prenatal vitamins. She also said that it should have no impact on future pregnancies and that I've already carried a baby full term she has no further concerns. Also, that everything flushing out of my system on it's own is the best that could have happened.

I love my doctor so much. After our talk she walked me to the checkout and said that she would recommended to see me in a year, but she would probably see me before then. I said that I hoped so. Then she gave me a great big hug, Stephen a handshake and Zoey a great big high-five. She is awesome!

So by the way, Zoey was with us through the whole visit and did just great! Stephen is so great with her and helped her run off some energy before we ever went to see the Dr. She was quiet during the ultrasound and kept holding my hand, which just melted me heart. I kept telling her that nothing was wrong with Mommy, but I don't think she was convinced until I picked her up and gave her a great big hug after it was done. Zoey is so curious and full of energy, it makes every experience more interesting.

I didn't cry today. It has been almost two weeks since I actually had the miscarriage so I've had plenty of time to go through all the emotions: loss, doubt, fear, grieving, mad, sad... One night I couldn't sleep and ended up going to the living room and balled. I mean snot was coming out of my nose and everything, but by the time I calmed down I realized I was crying as much with the fear that something would happen to me or Stephen or Zoey as I was about the loss of this baby. I am sad over loosing this baby, I really wanted to be pregnant and give Zoey a sibling, but Stephen and I are still young and have plenty of time to make lots of babies and give me my big family.

I think it was said best by my Mother-in-law: God knew that something wasn't right about this baby and He took him up to heaven early and quickly. I think she is right. God knows us even in the womb and He knew this baby. I trust that he has a plan for us and even this baby was part of it. I never did get attached to the baby, there was always something standing in the way to worry about. I was excited to be pregnant again, but even Stephen and I talked about the fact that this baby just didn't seem real. We thought it was just because it was a second baby, but I think it was God's way of letting us know that we would have to say goodbye to this baby early on.

I never had peace over this baby or this pregnancy. I thought it was odd, even after the miscarriage, I never found that inner peace that lets you know everything will be okay. Then one afternoon I was listening to the radio while Zoey and I played outside and there was an answer. Sometimes our trials are not meant for us at all. We learn things along the way, but it gives us a testament to share and help others. The subject was focusing more on people who did bad/stupid things and turned their lives around to focus on God, but it spoke to me as well. The things we go through aren't always meant only for us, we can take our tribulations and relate and share with others. This thought gave me peace over the whole situation. This is something that I never wanted to happen, but now that it has, I can share God's love with others who are going through similar trials.

After this revelation "You Found Me" by the Fray came on and I laughed. I had spent weeks praying over this baby and got no peace. Part of the lyrics says:

"Where were you when everything was falling apart?
All my days were spent by the telephone that never rang
All I needed was a call that never came
To the corner of 1st and Amistad"
That's how I felt. I'm going through all of this and all I hear is silence. But God always has a plan, even if he doesn't share it when you want him too.

So I feel like there is a lot to say, but I think I said as much as I can right now. I love my family very much and I will continue to love them and when the time is right our family will grow again!

I do want to thank everyone for your love and support. You have no idea how much it means to me to have so many good friends.
Posted by Amanda McCusker at 7:29 PM

Email ThisBlogThis!Share to TwitterShare to FacebookShare to Pinterest
Labels: Miscarriages