Most people that know me and Stephen know we play a lot of video games, many in which you "level up" characters. This is accomplished by learning and mastering skills and gaining experience points that add up to a new level. This is the analogy I'm going for with the title "Zoey earns a level." 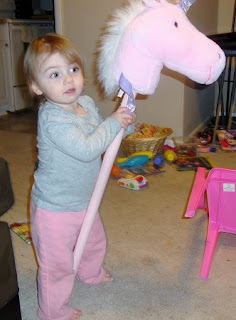 Zoey riding her horsey
Over the past week it seems like Zoey has learned a whole new set of skills:

We set up Zoey in her big girl bed a week ago and she is doing fabulous with it! I'm so proud of her. Every night she goes to bed in approximately the same time as she did while in her crib. And she sleeps IN her bed the WHOLE night! I think that is awesome! I was prepared to find her in some corner of the room for several days, but she hasn't at all. She actually sleeps in her bed.

Tonight was the best bedtime yet. We watched Mickey this evening and Zoey knows when Mickey is over it is time for bed. When the Hot Dog Dance song came on tonight she danced during it and as soon as it was over she put her head down and headed toward her room. I couldn't believe it. She climbed into her bed and waited for me and Stephen to come tuck her in and kiss her goodnight. She cuddled up with her Tigger and Mickey and was already turning over to go to sleep. Stephen and I looked at each other and was like, Awesome!

She is also starting to sing randomly. She sings "one, two, three," but other random words she knows too. Like in the tub the other day she was singing "daddy, daddy, daddy..." over and over with different pitches, octaves, and even inflection in her voice. I think she is so cute when she sings and she looks happy too.

Yesterday evening we were watching Tangled. (Awesome movie by the way.) Zoey watched it for a while, but eventually got bored and simply walked over to her tub of blocks, poured them all out and started building towers. She comes over to us after several minutes and pulls my hand. She gestures to her tower creation. I was impressed. I mean it was a REAL tower, like almost as tall as she is. It was awesome that she wanted to show us. The best part is she just started playing with the blocks to occupy her with no encouragement from us.

The towers she made were pretty good. One section of it was even alternating colors of the same block stacked. Then she knocked that tower down and started building another one. She made several. They kept getting more creative and outrageous. One even had this skinny arm which immediately fell off because it was top heavy. However, she didn't get upset, she just picked it up, studied it, changed it a little, and then put it back on. This time it stayed. With the freedom to play with the blocks and us not fixing it for her all the time so it stays up, she has learned how to make some cool creations.

Also, she can now throw things in the trash on her own accord. She understands when we are in the kitchen fixing dinner to bring her cup from the other room so we can fill it for dinner. She has many new words, her favorite being eat. When she is hungry she will go to the fridge and get either yogurt or an apple (or some type of fruit). She will get out plates and forks (they are her plates, but she usually gets one out for each of us) while we are fixing dinner, especially if she is really ready to eat. 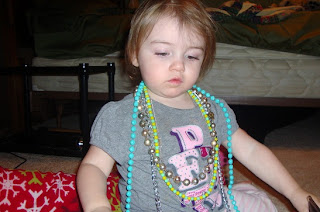 Zoey playing dress up jewelry
So I am realizing I have written a small novel, but these are some of the awesome things Zoey has been doing recently. I am often impressed with the new things Zoey does. She is really becoming a person and growing constantly in her own personality. I am very proud of my Zoey and I just hope we can continue to keep her challenged so she doesn't get bored. It's amazing how it seem like over the course of just a few days she seems like she can do so much more than before. And now you can see why I say Zoey has definitely leveled up.
Posted by Amanda McCusker at 9:07 PM