Today has been a very exciting day! It's really just a bunch of little things, but it's the little things in life that make it worthwhile. So...I am ready to chatter away! 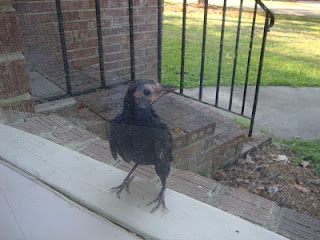 There was a lot of bird babble and Eli was very interested in the window. I looked out and saw this baby bird on the window sill. It was really cool. The Mommy or Daddy birds were up on the roof talking to him. He stood there for a while, gathering the nerve probably, and then flew along the ground and then off the ground. It was awesome to see one of his first flights! 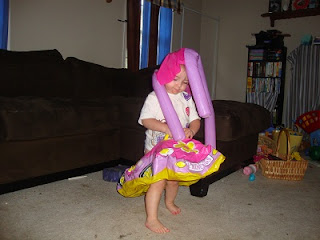 Our plan today was to go to the pool with a friend of mine, Michelle. To get ready I got out all of Zoey pool floats. Once Zoey saw this one she immediately started playing with it, she didn't even give me a chance to blow it up. She was so cute driving the little float car. She would run across the room saying "choo choo!" 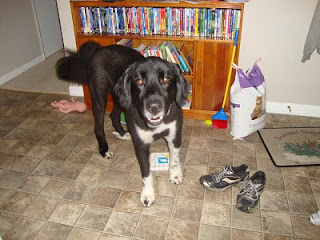 This morning I took Eli to the vet. It was a well appointment to check him out after adopting him last Saturday. He got a clean bill of health! He weighs 98 pounds. He has actually gained a little weight since he has been with us from the shelter, so that is a very positive thing. And he did so good at the vet! Even though there were several dogs and cats there, he did not get to excited about them and stayed right with me. All the nurses and the doctor commented on how well behaved and sweet he was. He gave everyone that leaned down to him a big doggie kiss. They also commended me on my was of handling him (keeping him close to me and giving cues to where he needed to be) which made me feel really good. I have never had a dog before so I am learning as I go. Thankfully, we have watched a lot of Caesar and the Dog Whisper so I understand the concept of pack leader. 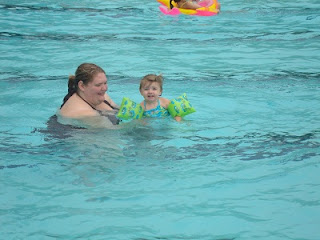 Even though it was overcast today we still made it to the pool with Michelle. Zoey had such a wonderful time! She is such a water baby, just like I was. Those arm floats are awesome! She got confident enough in the water that I didn't even have to hold her all the time. I was so proud of her. She would kick her legs and reach out her arms trying to swim. She even floated back and forth between me and Michelle a few times. She didn't want to leave either, but the clouds were starting to turn dark so it was time to go. 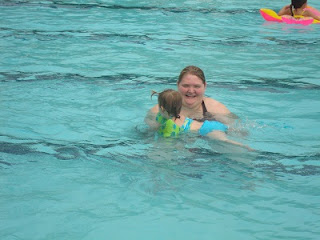 Look at her go! She is such a little fish!
It's been a good day. I hope everyone has a great weekend!
Posted by Amanda McCusker at 12:01 PM

Email ThisBlogThis!Share to TwitterShare to FacebookShare to Pinterest
Labels: Our Adventures, People We Love, Workouts, Zoey