I have concluded that Eli is a wonderful addition to our family. We adopted a 6 year old Newfoundland mix just over two weeks ago from the SPCA.

He is now part of the family. Zoey gets along with him well. They aren't quite best buddies yet, but Eli tolerates her and she is learning all kinds of things from having a dog. The first things Zoey has learned from having Eli are words. She will now say "sit" and point to the ground. It's pretty cute. She can also now say "stay" and "dog" consistently. She points to Eli's food and tells him to "eat eat" if he doesn't finish his food. 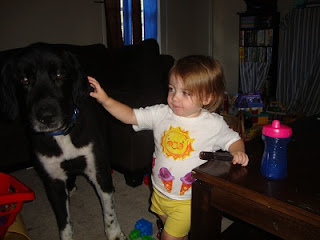 Eli doesn't really get along well with our two cats, but we are tying to form a toleration. He would chase them, which would just annoy my. I don't know if Eli means to play with them or if it is territorial issues.After several scoldings that this was not acceptable behavior, he pretty much just leaves them alone. Laz and Creampuff (the cats) have taken to stay out of his reach. 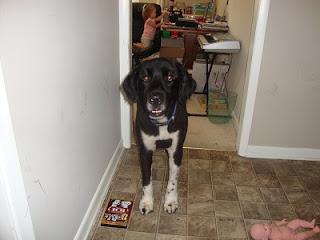 The only other annoying this he does is mark territory in the house. I expected it in the beginning, but now it's just annoying. He especially has a tendency to mark bags or boxes around the house. For example, I had a box of diapers sitting out in the hallway waiting to be put up in Zoey's room and the next thing I know it is wet and stinks. Sigh. At least not many diapers were wasted. 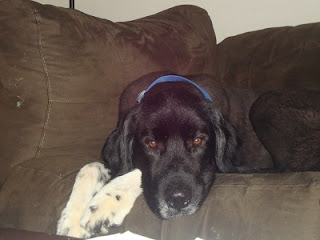 Overall, we love having Eli. Our backyard is great for him to run around in and we run around with him. We go on family walks, which is great to get outside and good exercise too. Though I think it will be even more fun when it isn't 100 degrees outside. 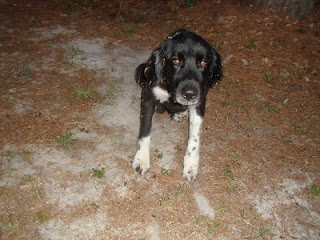 Eli is such a lover. He just loves to give doggie kisses, ones that cover your whole face. His kisses make Zoey laugh, probably because on lick is her whole face. He will cuddle with us, which will come in very handy in the winter. He is just so sweet.

He's done really well with friends we've brought over too. He is not aggressive at all (towards people, food or other dogs.) I am very thankful for this. Once in a while he gets over excited and forgets that he weighs a hundred pounds though. 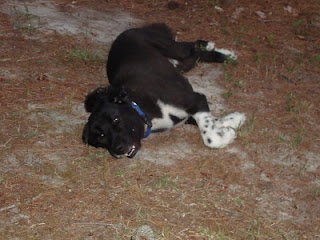 I think getting an older, more mature dog was the right decision for us. It was so easy for us to transition into having a dog. He is already house trained and knew commands. It took a couple days to get adjusted, but we didn't have to teach him much. And thankfully, he doesn't try to eat everything in sight, so Zoey's toys that are lying all over the house are safe. 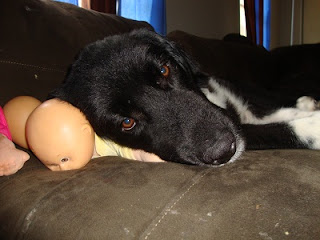 This is my first dog ever and so far it's going really well. I spend a lot of time with him since I'm at home all day and he really is a sweetheart. This is also our family's first dog and it is a fun adventure. I'm glad Eli chose us, he fits in very well to our crazy little home.
Posted by Amanda McCusker at 6:22 AM

Email ThisBlogThis!Share to TwitterShare to FacebookShare to Pinterest
Labels: Our Adventures, People We Love, Workouts, Zoey