Father's Day Adventure at the Aquarium

To celebrate Father's Day this year, we went to the SC Aquarium. Zoey had a blast! She loved all the fish and animals. We circled the entire aquarium three times. Each time Zoey found something new to explore. It was a great chance to learn and spend time together.

We spent Father's Day at the aquarium last year too. I wouldn't mind if it became a tradition. It's really cool to see how much differently Zoey experienced it this year. Last year, she was in awe of all the fish and colors, but this year it was much more than that. She was interested in the exhibit itself and the fish in it. She wanted to play and interact whenever she could. And the most different thing was she was running around from one thing to the next and back again.

I like telling stories with pictures, so I have a lot of them. However, my camera unfortunately broke in the middle of the outing (that'll be a whole other story.) I still have lots of pictures because we had already seen the whole aquarium by the time I was camera-less and were starting our second trip through. I did still have my iPhone, so I suppose I wasn't exactly camera-less after all. The last three pictures are with the iPhone, it worked well as a last resort.

So without anymore ado, I present our Aquarium Adventure: 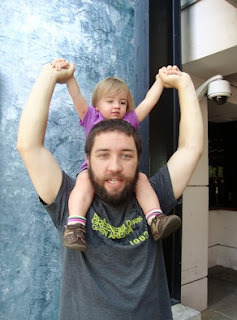 Happy Father's Day Stephen! Thankfully we didn't have to stand in a long line this year because Zoey was ready to go see the fishes! She was so excited about our adventure. 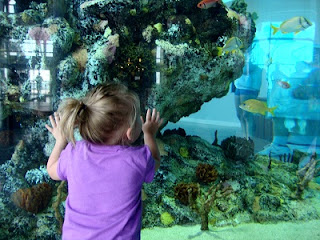 This is the teaser trailer to the aquarium, the first thing you see when you walk in. Zoey was amazed! She loved the fishes and probably would have stayed right there all day, but we told her there was more to see, so onward we went. 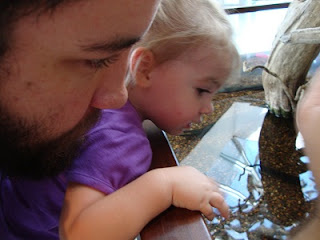 Zoey liked the turtle tank. It was really cute because there were two big turtles and one baby one, just like our family. Zoey liked watching the turtles swim around and kept pointing to them and saying...something that sounded very intelligent if I could understand her. 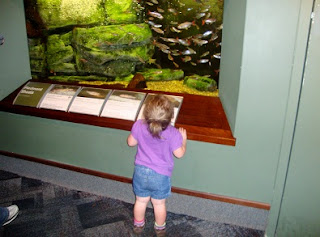 Zoey was in awe of the fish. I call her my little scientist because she is always looking at things to figure out how they work or what they are doing. It was great that she could see most of the exhibits without us picking her up; I think she love the independence of the adventure. 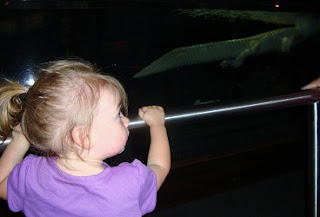 This is the albino alligator. Zoey enjoyed studying it and came back to it again the next time through. The alligator was also swimming around, which is the first time I'd seen it moving. She was happy just to stand and watch for a bit. She seems to be drawn to the alligators, snakes and turtles. Maybe she will be a reptile/amphibian girl...who knows. 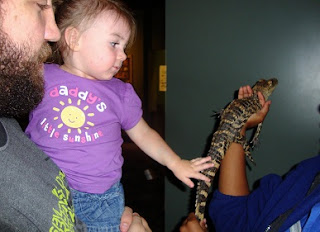 Then Zoey got to touch a real alligator! This little guy was only 4 months old. At first, she was hesitant, but after assurance that it was okay she reached out a petted him very gently. She was smiling afterward so I think she liked him. 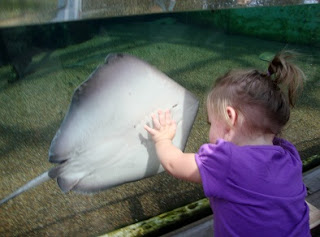 This is a new sting ray exhibit where you could actually feed them. We didn't feed them, but it was pretty cool to see the bigger ones up close. I caught this awesome picture of Zoey with one. She doesn't seem to be very afraid of them instead she just observes and investigates. 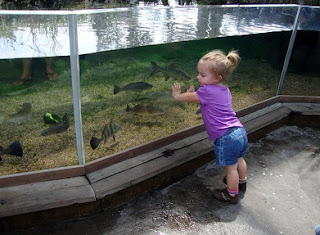 This was so cute. Zoey kept pushing on the glass and saying "It's stuck!" We were like, they suppose to be stuck or this would be the ocean instead of the aquarium. She liked watching all the fish though, but then it was time to run to the next exhibit. 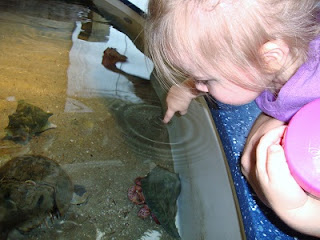 Next was the touch tank. Zoey liked that a lot. She pointed to a crab in a conch shell and watched him move his claws around. She liked playing the the water and watching the creatures, but she wasn't very interested in touching many of them. Then again, it was also lunch time so we stopped and enjoyed a yummy sandwich. 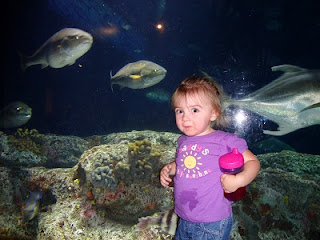 Zoey loved the ocean part. It's my favorite too. This was the really BIG fish tank. She turned around with these big eyes with the impression that those were some really BIG fish! She watched these fish awhile too. They kept swimming by in the same direction and she would follow one all the way across the tank and then go to the next one. 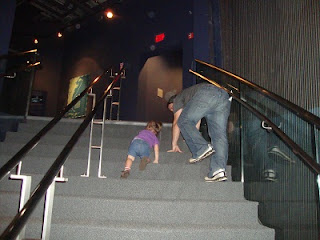 Zoey is so funny because I think she had as much fun climbing on the stairs as anything else. She would race up the stairs with Stephen and then run to the elevator to go down, only to do it again. We humored her for a few times and then said that we had enough of a workout for one day. Then we took her to the play areas and let her run off some of the seemingly unlimited energy. 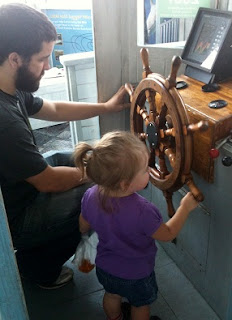 The aquarium has this cool mock fishing boat that Zoey really loved playing on. She liked turning the wheel and talking into the intercom. It was a crabbing boat and even had a little crane on the back with a cage full of crabs (stuffed animals) off the back to pull up. We watch "Deadliest Catch" as a family so I wonder if she understood the purpose of the boat. I tried explaining some of it, but mostly she just enjoyed playing. 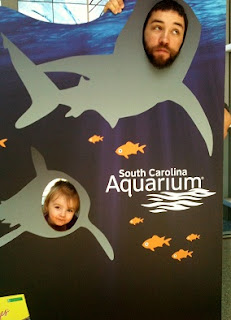 We had such a great time at the aquarium. I think Zoey learned a lot too. I love that we can share these experiences with her and hopefully she keeps her love for learning forever. 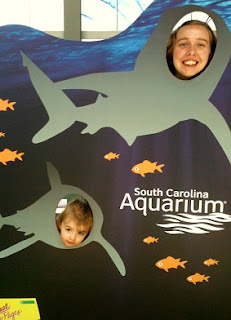 After our adventure to the aquarium, Stephen and I decided to have fish for dinner. That seems ironic now that I think about it, but it was delicious. It turned out to be a pretty awesome father's day!
Posted by Amanda McCusker at 10:14 AM

Email ThisBlogThis!Share to TwitterShare to FacebookShare to Pinterest
Labels: Our Adventures, Zoey