This has been a week where I have needed to remember all the small and big things I am thankful for constantly. I have to admit, I'm glad this week is over and I'm looking forward to this weekend and Father's Day!

Here are a few more things I'm especially thankful for this week: 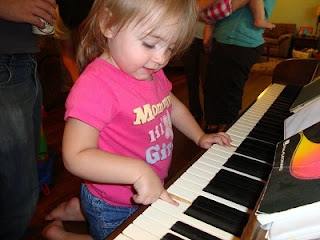 We visited some friends last weekend and they had a real piano. I was in heaven and turns out so was Zoey. I love how interested in music she is because Stephen and I are both music lovers and players. Zoey climbed right up to the piano and started playing away. It wasn't Beethoven by any means, but it also wasn't just banging the keys. She really does pick out notes and make music instead of just noise (most of the time at least.) We have a keyboard at home so we get to hear her music all the time, I love it! 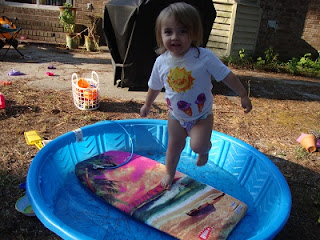 I have to say, Zoey has amazing balance. She got the great idea to surf in her little pool this week. I was sure she would fall and bust her face, but she has yet to fall off of that thing. In the picture there was not too much water in it and she was jumping on it and everything. But later in the week after it rained, she was really surfing on it because it wouldn't push to the bottom when she stepped on it. The crazy thing is, she still didn't fall. I know I would have fallen on my face if I tried to stand on it. 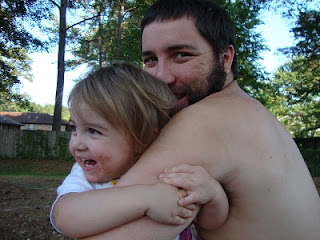 I am especially thankful for Stephen this week. I always love him and Zoey more than words can express, but this week I really needed the extra encouragement and they were right there giving me exactly what I need. 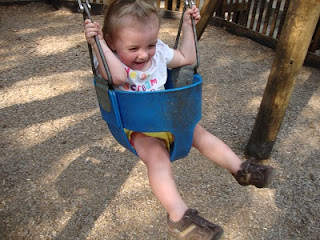 I love the park! I need to do a post about our adventure there because it was a great one! We brought Eli (the dog) and Stephen went running with him and Zoey and I played on the playground. It's amazing how much of an imagination Zoey already has even though she is not yet two and has a limited vocabulary. I am also surprised by how fast she can run! 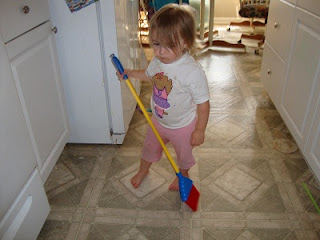 Zoey is my little motivator. One afternoon she got it in her head that the kitchen needed to be cleaned. She dragged me over to empty the garbage and sweep the floor. It was a lot more fun with her helping and even initiating it. I'm going to enjoy this one for as long as it will last! 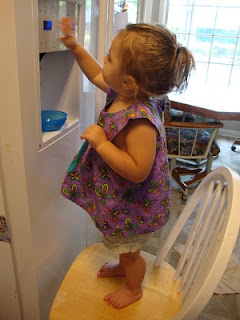 Lastly, but most certainly not least, I am thankful for child locks on the ice machine. As you can see Zoey dragged her chair (usually in the kitchen so she can stand on it and help) over to the ice machine and started investigating. She knows water and ice come out and would love that whenever she wanted. Thus I will not give her many opportunities to figure out the child lock because I have a feeling she unlock it fairly easily.
I hope you have a great weekend and Happy Father's Day!
Posted by Amanda McCusker at 11:31 AM