Everything is More Fun with Cousins!!!

We we were visiting with Stephen's family to celebrate the Fourth of July we did do one thing besides sitting around the house eating all weekend. We went to the park and the pool! These are things that we do every so often with just us, but it is so much more fun with cousins! 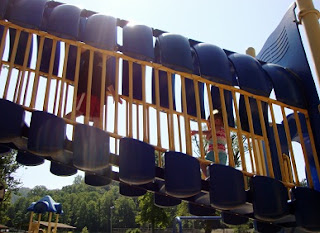 Connor was super sweet and came back to help Zoey up the walks to the slide. Zoey isn't afraid of much if anything, but she doesn't like cracks and the walk up there had some big ones. It's so funny that she will even avoid the cracks in the sidewalk. 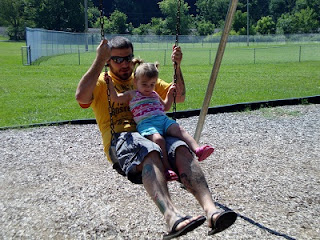 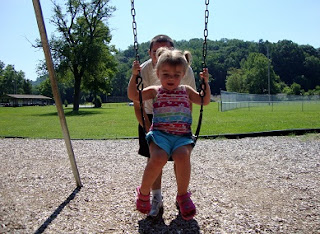 Zoey didn't want anything to do with the "baby" swings anymore. Now that she has figured out how to hold on all by herself she is ready to go. 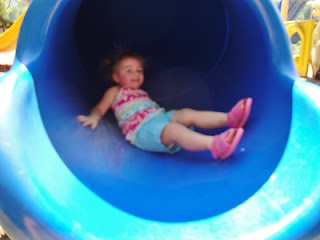 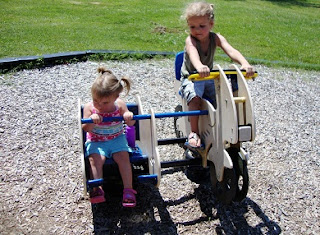 Zoey and Kiley co-piloted the motorcycle. Zoey kept saying "choo choo" (her noise for anything that moves) and making Kiley laugh. 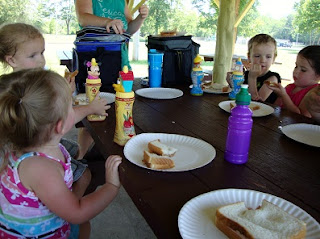 Yummy lunch! All four sweaty kids sitting down for some massive amounts of water and peanut/fluff sandwiches. The perfect afternoon picnic. 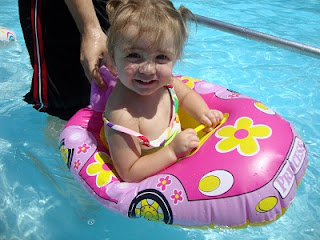 Zoey loves the water! I love her smile in this picture, she was so excited! 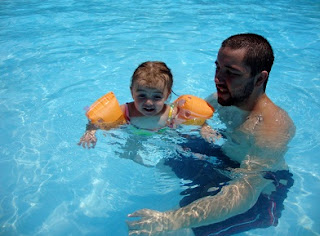 Zoey is a fish! This is her swimming all by herself (Stephen has no hands on her, but is staying really close anyway.) Zoey didn't want anything to do with the kiddie pool. She would go over for a few minutes and them almost immediately go running for the big pool again. 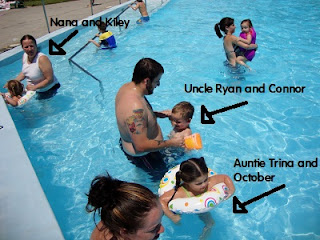 It was nice that we had more adults than kids. The older girls had tube floats and Connor and Zoey shared arm swimmies. They all had a blast and enjoyed the water in their own way. 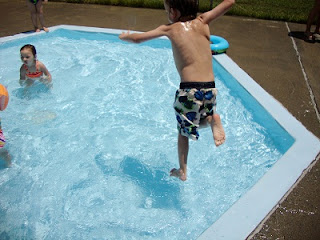 Connor leaping into the kiddie pool. All the kids were fascinated when Stephen and Ryan jumped off the diving board, but they weren't allowed to because they couldn't swim without floats (pool rules). But they still had fun jumping off the side of the pool. Connor liked this because he didn't need anyone to catch him. 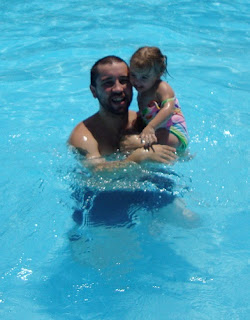 Zoey and Stephen had a blast in the water. Zoey wouldn't go to anyone else for the first bit, she was so excited to be with her daddy. She loved jumping off the side of the pool into his arms too. 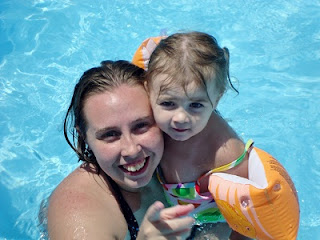 She eventually let other have a turn with her in the water. I greatly enjoy playing and swimming in the water together. She is a fish just like I was. In fact, I see so much of myself in her. She loved swimming between Stephen and I just like I did with my parents. I also had no interest in the kiddie pool when I was a kid. And those arm swimmies are the best things EVER!
Posted by Amanda McCusker at 8:36 PM

Email ThisBlogThis!Share to TwitterShare to FacebookShare to Pinterest
Labels: Our Adventures, People We Love, Zoey