We had these for dinner and they were delicious! These are similar to the potato skins you get as appetizers in restaurants, but I like them better because they have more flavor. I like to add an extra dollop of sour cream with each serving. They work great as a side or an appetizer.  Here is my recipe... 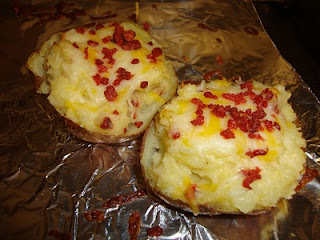 You will need:
Medium sized potatoes
Butter
Sour cream
Shredded cheese
bacon bits
salt and pepper
(basically whatever you like on baked potatoes will work perfect for this recipe)

1. Cook potatoes in oven at 400 degrees for 40-60 minutes.
2. Cut potatoes in half and scoop out the insides into a bowl. Place the halves of potatoes on a baking pan.
3. Add all the "baked potato" ingredients (butter, sour cream, shredded cheese, bacon bits, salt and pepper). Save some cheese and bacon for later. Mix well. It should have a mashed potato consistency.
4. Spoon this mashed potato mixture back into the potato halves.
5. Top each potato bite with shredded cheese and bacon bits.
6. Bake for about 10 mins longer or until cheese is melted.
Posted by Amanda McCusker at 4:21 AM

Email ThisBlogThis!Share to TwitterShare to FacebookShare to Pinterest
Labels: Recipes