We went to see Andy McKee in concert at The Melting Point in Athens, GA a few weeks ago. It was amazing! Andy McKee is an acoustic guitarist with smooth, percussion sound. At one point he had the top three most viewed videos on YouTube. His most famous song is "Drifing." It was amazing to see him play live and feel the music. Stephen and I had a great time together. 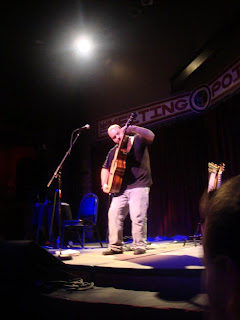 The best part is the story behind our going in the first place. At the end of last year Andy McKee sent out an S.O.S because he saved over his wife's Skyrim (a video game you put long hours into) file. It was Stephen who sent him the fix for the file. Andy said Stephen "saved his life." In return, Andy gave up guest passes to see his show in Athens, GA (the closest he was coming to us this tour.) We accepted with great enthusiasm.

During the encore on stage, Andy actually calls out Stephen's name and finds him in the crowd (not hard to do, it was a small venue and we were on the second row). It was a perfect moment! 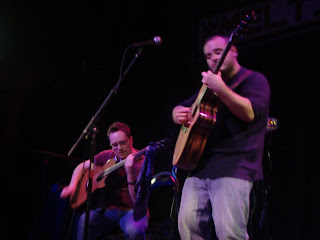 After the show we were able to talk with Andy and Antoine Durfour (another amazing acoustic guitarist who opened for Andy). We got to shake their hands and get an awesome picture. To make things even better, Andy wanted a picture for himself of he and Stephen (probably to show his wife). It was so surreal. 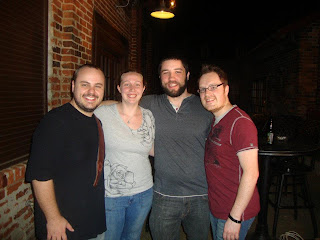 The whole evening was a special treat for Stephen and I. We hadn't had a true date night in a while and this was beyond amazing. It also marked our first night away together leaving Zoey with Granny and Pops overnight for the first time. It went really well for everyone. Zoey was good and we were able to enjoy a night out. We ate a delicious dinner and walked around Athens. It was a beautiful night in every aspect.
Posted by Amanda McCusker at 12:36 PM

Email ThisBlogThis!Share to TwitterShare to FacebookShare to Pinterest
Labels: Our Adventures, People We Love