Sometimes It's Nice to be a Girl

Most days Zoey and I are covered in mud and playing outside. We are both tom-boys and like to get dirty, and rarely worry about looking "pretty." At least I grew up that way and Zoey is following in my footsteps.

This week I decided to cut my hair. I've been contemplating it for a while and I just decided I wanted it done, so I cut it myself. My theory, if I'm going to pay $20-60 for a bad hair cut, I might as well give myself a bad hair cut at home, at least then it's free. I did it before and it worked out fine.

This time, I honestly think it looks alright. If I knew what I was doing I would probably make a couple tweaks, but it is good. I cut it a little shorter than I really wanted, but I cut one lock too short and it ended up being about an inch shorter. But it doesn't really matter, in a week or two it will be where I wanted it anyway. It feels so much lighter and cooler, which was what I was going for, so I'm happy.

I thought about cutting Zoey's hair since she was right there with me, but I decided against it. Zoey's hair is so pretty, but I suppose one day I will have to bring myself to cut it.

Since I took the time to cut my hair, I also took the time to pluck my eyebrows, cut my nails and paint my toenails. Zoey was sitting right next to me the whole time. She takes great interest in what I do so I explain what I'm doing. She also handed me different earrings to model for her. We had lots of fun together.

Sometimes it's fun being a girl. Especially at times like today when I bond with my daughter over girly things. We love getting dirty and rough housing, but it's fun to look pretty and make yourself feel good. It's fun being a girl because it's not perfect, but it is sometimes the best of both worlds. 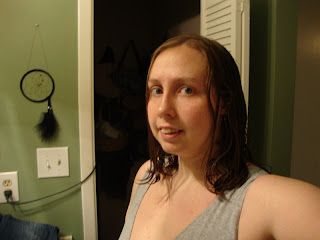 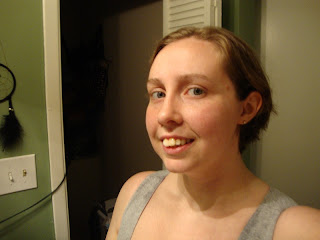 Posted by Amanda McCusker at 11:12 AM