I've always enjoyed Halloween, it can be a lot of fun! This year, I have enjoyed Halloween even more because Zoey is really getting into it. She loves the pumpkins and will point out all of the Halloween decorations we see with bright, excited  eyes. It is more fun to see the mystery of Halloween through Zoey's eyes. 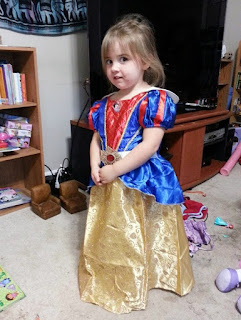 Zoey chose her own Halloween costume this year. Ever since they first put them out, Zoey has gravitated to Snow White. Not just a princess, but Snow White specifically. If you ask her who her favorite Princess is, her answer (9 out of 10 times) is Snow White. I was excited that we were able to provide what she wanted the most. When we first brought the costume home, she was on cloud 9 all afternoon while she was wearing it. 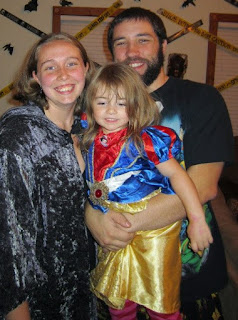 We did go to one Halloween party. In the spirit of Snow White, I dressed up as the evil Queen and Stephen was Sleepy Dwarf. It was fun to be part of Zoey's imagination. Even if she called me "Mommy Witch" and her Daddy "Naptime Superhero" all night, I think she understood we were doing it for her. 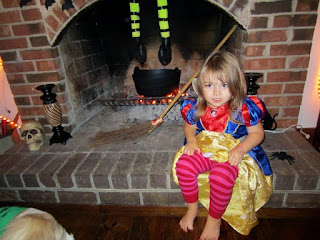 The best part about this party was the creepy spider that swung down with a cackle hiding in the bathroom. Yes, it was scary, it was suppose to be. But Zoey saw it and laughed, saying "silly spider." We did give her a little warning, but still, her reaction was priceless. After a night full of cupcakes and play, she said her favorite part of the party was "the dancing spider in the bathroom!" I think she has this Halloween thing down pat.

I hope everyone has a fun and safe Halloween! Trick or Treat!
Posted by Amanda McCusker at 6:31 AM