A Wife of Noble Character: Respectable and Respected

Proverbs 31:22 -- "She makes her own bedspreads. She dresses in fine linen and purple gowns."

Knowing how to sew and mend is a great resource, which can save time and money of all who learn it. But frankly, we live in a society today that it is just not a skill that is necessary in the way it would have been when these proverbs were written.

"She makes her own bedspreads" is significant not only because she can sew and create a blanket. It goes beyond the initial words to mean something much more. It shows that the wife of noble character can do for herself. She doesn't wait for or expect others to do for her. She is capable and willing to do what needs to be done herself. She does what is necessary to be prepared for winters without having to be told or ordered to do it. She knows what is coming and does what she needs to to provide for herself and her family.

This actions shows strength and independence, not only domestic submission. The wife of noble character proves to be proactive, intelligent, creative and willing to do what needs to be done to take care of her family.

"She dresses in fine linen and purple gowns" means that she is respectable and respected. Purple gowns were worn by the wealthy and royal because the dyes were precious and rare. By describing her in fine linens and in purple gowns shows she stood on her own. She organized her business, managed her family and was respected in the community. 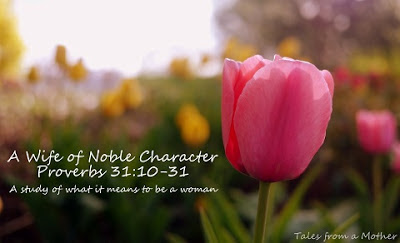 Read More in the "Proverbs 31: A Wife of Noble Character" Series

There are more Devotionals where this one came from!
Study God's Word and be Blessed!
Posted by Amanda McCusker at 4:00 AM