"My Salinger Year" by Joanna Rakoff 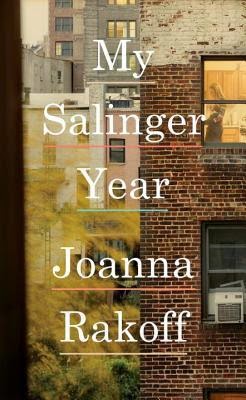 The title is what made me want to read this novel. I originally thought it was fiction; however, that is not the case. It is a memoir, the story of Joanna, a girl trying to pursue her dream in the literary world during the late nineties. While living in New York City, she takes a job as an assistant to the literary agent for J.D. Salinger. As she spends her days in a stuffy, under technically advanced office she begins to question herself as she answers the copious amounts of fan mail to Salinger. Her professional and personal life are brought into question as she discovers her own bold and liberated voice.

I loved the brutal honesty of the literary world in this novel, especially at the brink of the 21st century. It was a time where everything was about to change and you had to decide which side, the past or the future, you were going to be on. I also loved Rakoff's portrayal of Salinger's works. I have read Catcher in the Rye a couple times, though none of his other novels. I am now even more curious to read Franny and Zooey than I was previously, just to form my own opinion of the book. Rakoff raises many questions concerning the life you want to live. These are many of the same questions that I have and continue to ask myself. Anyone who claims to be a writer could relate to this story in some way, I know I did.


I know, I said reflexively, but I didn't. I didn't want to be normal. I wanted to be extraordinary. I wanted to write novels and make films and speak ten languages and travel around the world.

Writing makes you a writer,” he’d told me. “If you get up every morning and write, then you’re a writer. Publishing doesn't make you a writer. That’s just commerce.

She’d never spent entire days lying on her bed reading, entire nights making up complicated stories in her head. She’d not dreamed of willing herself into Anne of Green Gables and Jane Eyre so that she might have real friends, friends who understood her thorny desires and dreams. How could she spend her days—her life—ushering books into publication but not love them in the way that I did, the way that they needed to be loved?

So we’re all doing a pretty good job not revealing our emotions, right? But if you can’t reveal your emotions, how do you go on? What do you do with them? Because, you see, I keep crying at odd moments.

He surrounded himself with fools - the broken, the failed or failing, the sad and confused - so that he might be their king. Which, obviously made him nothing but the king of fools.

And then a strange realization arrived: the me who talked to Salinger--nervously, about poetry--was the actual me. Though he still didn't know my real name.

Salinger was not cutesy. His work was not nostalgic. These were not fairy tales about child geniuses traipsing the streets of Old New York.
Salinger was nothing like I'd thought. Nothing.
Salinger was brutal. Brutal and funny and precise. I loved him. I loved it all.

That letter, written in dithering girlspeak, espouses nothing but love for Lane, so much so that any reader--except Lane--would suspect the lady doth protest too much. And indeed once Franny and Lane are seated at lunch, Fanny cannot--absolutely cannot--stick with Lane's program. She can't pretend she cares about Lane's paper on Flaubert. Though she doesn't express it this way, the world strikes her as filled with phonies--with egos, to use her term--and she can no longer go along with the enterprise of pretending this isn't so, of pretending that her professors are geniuses, that anyone who publishes in a small magazine is a poet, that bad actors are good. She can, in short, no longer participate in the world, with its web of socially constructed lies. She's dropped out of the play in which she's been case as the lead. She's stopped doing her reading for class. She's done. Done with everything except the little book she's been obsessively reading, The Way of a Pilgrim, in which a humble Russian peasant wanders the land trying to figure out how to pray. His answer--which Franny has adopted for herself--is the Jesus Prayer, a simple mantra, which she repeats over and over, trying to synchronize it with her heartbeat, as per the pilgrim's instructions. If you have read the story, then you know: This is not a story about Christianity. Franny's adoption of the Jesus Prayer has less to do with Jesus than with her desire to transcend her own troublesome ego, to stop the superficial thoughts and desires that plague her. To be her authentic self. To not be the person the world is telling her to be, the girl who must bury her intelligence in her letters to Lane, who must compromise herself in order to live.

Maybe you, like me, identified so strongly with Franny Glass, upon first reading, that you wondered if Salinger had somehow--through some sort of bizarre, science-fiction-style maneuver--tunneled into your brain. Or maybe you, like me, found yourself sobbing with recognition, with relief, that there was someone else who had felt such exhaustion, such despair, such frustration with everything, everyone, including yourself, your inability to be properly nice to your well-intended father, or your inexplicable ability to shred the heart of the man who loves you most. Someone else who was trying to figure out how to live in this world.

To read Salinger is to engage in an act of such intimacy that it, at times, makes you uncomfortable. In Salinger, characters don't sit around contemplating suicide. They pick up guns and shoot themselves in the head. All through that weekend, even as I ripped through his entire oeuvre, I kept having to put the books down and breathe. He shows us his characters at their most bald, bares their most private thoughts, most telling actions. It's almost too much. Almost.

There was something about that modest advance, that initial rejection, that soothe me. Salinger had not always been Salinger. Salinger had once sat at his desk, trying to figure out what made a story, how to structure a novel, how to be a writer, how to be.

She needed this wedding—this perfect, minutely orchestrated wedding—to shout, This is who I am. To tell us all that she was not that girl who’d tried to kill herself freshman year, the girl who developed an unhealthy obsession with her poetry professor junior year, the girl who had baffled psychiatrists and mystified her parents, for she had once been so perfect, so good, so obedient.

The worst that being an artist could do to you would be that it would make you slightly unhappy constantly.

Wait, wait, and you'll see. It gets easier once you're no longer graded, once you have to access your actions for yourself.

Here's to a love of books!
Happy Reading!

Posted by Amanda McCusker at 6:02 PM