Today, November 16, I stand with hundreds of thousands of others to raise awareness for pancreatic cancer and to demand better for patients and survival!

The pancreas is a gland in the abdomen that lies behind the stomach and in front of the spine. Its two main functions are digestion and blood sugar regulation. Pancreatic cancer begins when abnormal cells within the pancreas grow out of control and form a tumor.

The signs for this deadly disease begin with only vague symptoms, including abdominal or mid-back pain, loss of appetite, jaundice, weight loss, nausea, low mood or depression, pain in eating, change in stool and/or a recent onset of diabetes. If you experience one or more of these symptoms, especially without explanation, the Pancreatic Cancer Action Network urges you to see your doctor.

The exact causes of pancreatic cancer are not yet well understood. Research studies have identified risk factors that may increase the likelihood that an individual will develop pancreatic cancer:

The American Cancer Society states that pancreatic cancer currently has only a 9% five year survival rate. That is the lowest percentage of any major cancer. Pancreatic cancer killed more patients than breast cancer during 2016. The third leading cause of cancer related deaths in the United States is pancreatic cancer. It is anticipated to become the second around 2020.

Many have stepped forward to say that these statistics are unacceptable. More than 53,000 Americans will be diagnosed this year. They deserve better than being told to go home and get their affairs in order. They are not statistics - they are our mothers, fathers, sisters, brothers, colleagues and friends. Raise awareness for pancreatic cancer by sharing the risk factors and symptoms, which leads to early detection. It could mean saving the life of someone you love.

The Pancreatic Cancer Action Network (PANCan) is doing just that, raising awareness. They are also one of the largest sources of funding to provide advanced research opportunities. They push research forward through their nationally acclaimed grants program and clinical initiatives. Their goal is to double the survival rate by 2020. Their Vision of Progress is to rewrite the future of pancreatic cancer.

PANCan does so much more than just raise money for research funds. They also help patients and families by connecting them with the latest treatment options and by providing in-depth disease information.

Furthermore, they are in the community, leading and activating communities across the globe for the cause. They are also advocates for legislative support from Congress to increase federal research funding. PANCan is paving the way in its dedication to fighting the world’s toughest cancer. It is their urgent mission to save lives by attacking pancreatic cancer on all fronts.

November is Pancreatic Cancer Awareness Month. This year, PANCan encourages us to join them to Demand Better. For Patients. For Survival. You can Sign the Pledge and learn more about how to be #PANCaware.

Matt Wilson, a pancreatic cancer survivor from Portland, OR, says, “Reality set in at my nephew’s first birthday party. We had cake, friends over, and a firetruck. I thought, “This could be my last birthday with him.” Six years later, there’s no sign of disease. I want stories like mine to be the common ones, not the uncommon ones.”

You can read more Survivor Stories and the lives of those this deadly disease has affected. It is a huge step in understanding why so many people have taken action and made the commitment to raise awareness for pancreatic cancer.

This time last year, I knew nothing about pancreatic cancer, or the devastating affect the disease can have on those it touches. My education began when a friend simply asked if I would like to participate in a 5k called PurpleStide with her family. Since I’ve been trying to be more active, I readily accepted thinking about the act of running much more than the cause.

However, as I began to understand what this event was really about, I became mesmerized by the encouragement and support of everyone involved. I was honored to run with the Love 4 Linda team and Wage Hope at PurpleStride, the walk to end pancreatic cancer.

My friend lost her aunt to pancreatic cancer in 2012. After her passing, her entire family began participating in PurpleStride. They Waged Hope this year as they have for the past four years, and will continue to do until there is a cure. Brenda Wendt, Love 4 Linda Team Captain, said, “This deadly disease has stolen our best and our brightest, but it can’t take away our determination.”

PurpleStride Puget Sound, held on October 29, 2017, was a powerful and inspiring day. Thanks to the amazing participants and teams, they met and surpassed their fundraising goal of $325,000 to raise over $413,000. It is a beautiful show of support to give patients a better tomorrow and increase funding for more research, which paves the way for better, life-changing treatments.

Since PurpleStride was founded eight years ago, $87 million dollars has been raised for pancreatic cancer research and patient services. However, the true impact is not the dollar amount, but the progress to finding solutions. The once 6% rate has increased by 3% and is now solidly at 9%.

A 3% increase in the survival rate doesn’t seem like much, but it can make the difference when someone you love is in that small percentage. Moreso, the movement has come to enfold greater than one million people across the country to take action in the fight against pancreatic cancer. PurpleStride reminds us, “Purple ribbons don’t rewrite the future of pancreatic cancer. You do.”

Ron Rivera, Carolina Panthers Head Coach, Wages Hope with PurpleStride in honor of his brother, Mickey, who passed away in 2015 after just two years battling the disease. “Partnering with the Pancreatic Cancer Action Network allows me to not only honor my brother, but to take action against this deadly disease,” Coach Rivera said. “Too many people have lost loved ones to pancreatic cancer and without increased awareness and more people taking action, we cannot take down the disease.” Coach Rivera encourages everyone to take part in their local PurpleStride event, as he rallies in the streets of Charlotte, NC.

Fighting cancer is not only a struggle for the patients, but also for the doctors and researchers trying to find a cure. Funding is a large part of the ability to apply time and resources towards treatment and a cure. Channing Der, PhD, is a pancreatic cancer researcher at the University of North Carolina at Chapel Hill. His research is focused on finding therapies to “correct” the mutations in the KRAS gene, and is pleased that some of these strategies are now being evaluated in pancreatic cancer clinical trials.

Not only does Dr. Der work behind the scenes as a grant researcher, he is also a member of the Scientific and Medical Advisory Board for the Pancreatic Cancer Action Network. He devotes much of this life to improve the lives of those living with the disease, which includes participating in PurpleStride. 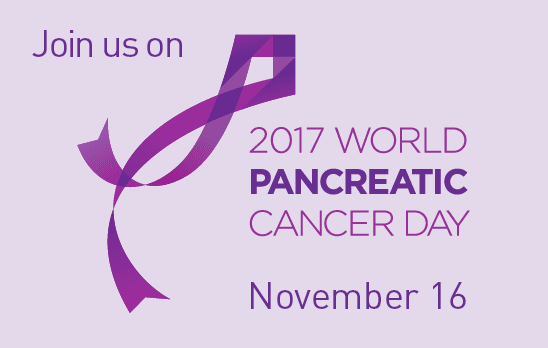 This is the day set aside each year to come together to raise awareness about pancreatic cancer. People from around the world will unite to Demand Better in the fight against the world’s toughest cancer. Through this combined effort, we are bringing greater attention to pancreatic cancer and better outcomes to patients. On this special day, we can make a world of difference.

Today you can Take Action against pancreatic cancer:

Today I wear purple to share what I have learned about pancreatic cancer and to support the people whose lives are impacted by this deadly disease. #WageHope #PANCaware
Posted by Amanda McCusker at 7:00 AM