Zoey chose the "Fruity Ice Slush" Experiment from her Usborne "50 Science things to make and do" book. She was really excited to see how she could make slush simply from using ice surrounding her juice.

First, we collected our materials. We needed: a large bowl, lots of ice, salt, a glass container and fruit juice.

Then we made a prediction. Zoey hypothesized that it would make a little bit of slush, but not the entire glass full. 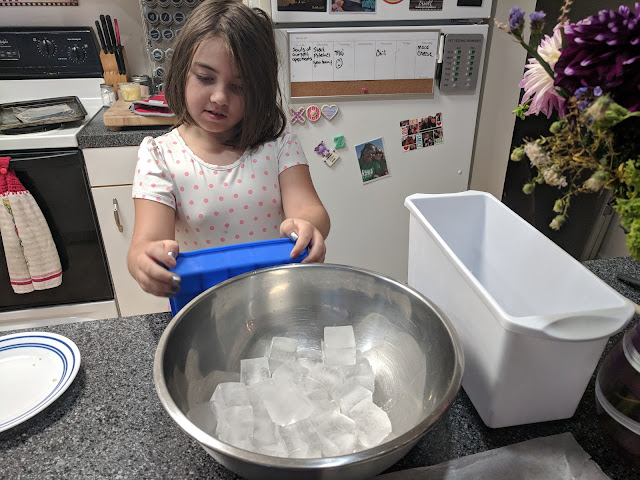 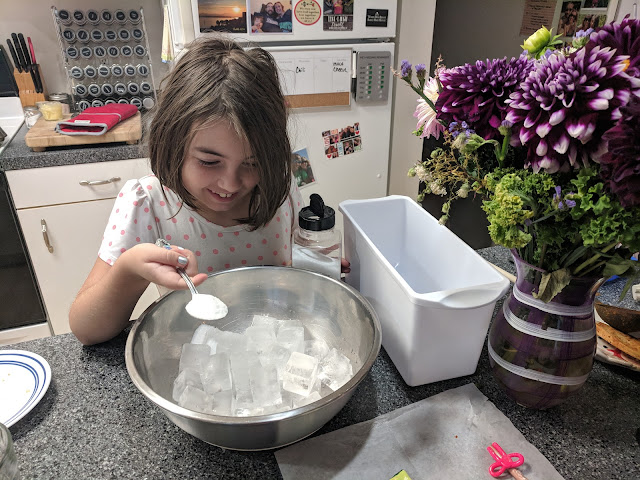 Next, she sprinkled salt on top of the ice cubes and stirred it in. (The directions suggest three tablespoons of salt.) 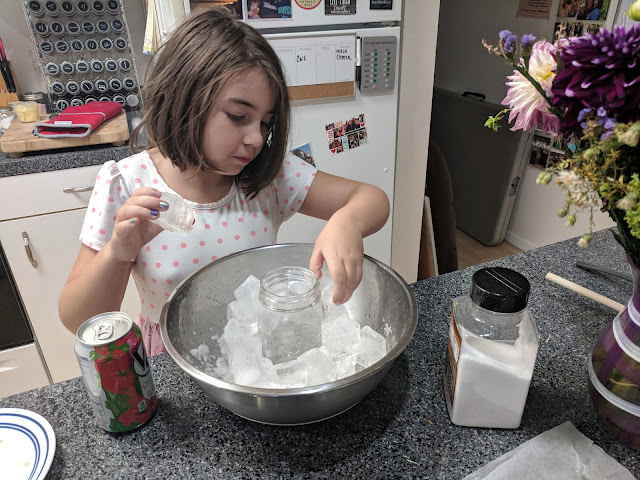 Next, Zoey put the glass jar in the middle of the ice, making sure non of the salt got into the jar. Then, she added her fruit juice. (We didn't have any fruit juice in the house, so we tried it with V8 instead. In hindsight, we decided we would try Kool-aid next time.)

Now it was time to wait. Every 10 minutes, Zoey stirred the juice with a spoon. After about an hour and a half, we began to look for the slush to form.

We realized here, that it wasn't really working at all. There wasn't even a little bit of slush in the jar. We continued to stir it every five minutes for another half an hour.

Even after the extra time, we realized this experiment didn't work.


The result: The V8 was cold, but there was no slush. We concluded that we may have a different result using Kool-aid or proper fruit juice instead of V8. Zoey declared the V8 was too thick and didn't contain enough water in the liquid for it to form slush. She also observed that there is a lot of salt in V8 that could have changed the result since it had a lower freezing temperature, just like the salt she put on the ice.

We learned about the science behind this experiment too. Adding salt makes the ice melt at a lower temperature, which absorbs heat from the fruit juice eventually making it so cold it will turn to ice. Stirring the liquid helps the cold liquid stay a slush instead of turning to ice.

It was a fun experiment, but we will have to try it again to see if it works better with a different liquid.

Posted by Amanda McCusker at 1:30 PM